Soviet aggression against Poland on 17 September 1939 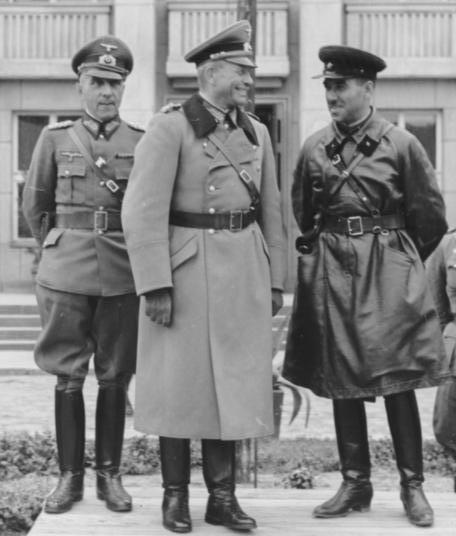 The Soviet Union’s attack on Poland on 17 September 1939 was the implementation of the treaty of 23 August 1939 between the Soviets and the Third Reich, commonly referred to as the Molotov-Ribbentrop Pact. In a secret protocol attached to it, the two states agreed upon the future division of Central and Eastern Europe between themselves.

The Soviet Union maintained a semblance of neutrality after the German aggression against Poland on 1 September 1939, and the Soviet ambassador to Poland even signalled the possibility of support in transferring supplies to the Poles, as Foreign Minister Józef Beck wrote years later in his memoirs. In fact, this was a cynical game to camouflage future actions. At the same time, the Soviet radio station in Minsk was broadcasting signals enabling the planes of the German Luftwaffe to effectively bomb Polish cities.

From the very first days of the war, Hitler expected Stalin to take by force the territories defined in the Molotov-Ribbentrop Pact as the Soviet sphere of influence. However, the communist dictator waited for the situation to develop, paying attention to the position of Great Britain and France, but also observing the developments on the Polish-German front. At the same time, the Soviet Union was beginning to prepare its own military units by announcing an order to raise combat readiness in the western military districts bordering Poland and began secret mobilisation.

Interestingly, two weeks after Germany’s aggression against Poland, “Pravda”, the most important Soviet newspaper, published an article ‘On the internal causes of Poland’s defeat in the war’, in which the author raised the issue of the multinationality of the Second Polish Republic’s society, using this issue for propaganda. As he stated, since the national minorities had no autonomy in the Second Republic, this led to its downfall. On the night of 16/17 September 1939, the Polish ambassador in Moscow, Waclaw Grzybowski, was summoned as a matter of urgency to the Soviet Foreign Ministry. There, he heard the text of a diplomatic note signed by Vyacheslav Molotov. The Soviet authorities stated, among other things, that “The Polish-German war has revealed the internal bankruptcy of the Polish state. Warsaw, as the capital of Poland, no longer exists. The Polish government has disintegrated and shows no signs of life. This means that the Polish state and its government have effectively ceased to exist. Thus, the agreements concluded between the USSR and Poland have ceased to be valid”.

In the next part of the note, Molotov pointed out the necessity for the Red Army to enter the territory of the Second Polish Republic because of its obligation to ensure the security of the Belarusian and Ukrainian populations. Ambassador Grzybowski resolutely refused to accept the Soviet note. At the same time, he pointed out the misrepresentations, the Soviet Union’s violation of international laws and treaties, and raised the issue that the Polish government was still in the country and pointed out that Ukrainians and Belarusians were also fighting in the ranks of the Polish army against the German invaders. The Soviet authorities communicated the contents of the note to England and France, at the same time cynically pointing out that, despite the Soviet army’s encroachment on Polish territory, the Soviet Union still considered itself a neutral state in relation to the war.

On 17 September 1939, Red Army troops entered Poland. About half a million soldiers, more than 5,500 armoured combat vehicles and more than a thousand aircraft were deployed against the Second Republic. Poland, fighting a war with Germany at the time, was able to counter the new invader with an incomplete 17 battalions and 6 squadrons of the Border Protection Corps (Korpus Ochrony Pogranicza, KOP), also the Dziśnieńska Half Brigade of National Defence (half unarmed), and the Independent Operational Group “Polesie” organised in the Polesie region by General Franciszek Kleeberg, as well as rear units. Much confusion was caused by a directive from Marshal Edward Rydz-Smigly, the Polish Commander-in-Chief, in which he recommended that Polish units withdraw to Romania and Hungary and not engage in combat with Soviet troops, except in cases of attack from their side and attempts at disarmament.

Soviet aggression caused the Polish authorities, led by President Ignacy Mościcki, to leave Polish territory on the night of 17-18 September.  Columns headed for Romania with the intention of going to allied France.

However, the commander-in-chief’s directive did not reach all Polish units, which provided heroic resistance to the invading Soviet troops. This was especially true of the KOP units protecting the state border. A symbolic place was Tynne near Sarny, where a few squads in the fortified bunkers under the command of Lieutenant Jan Bołbott held off Soviet troops for two days. The heroic resistance was broken after the bunkers were blown up and Polish soldiers were killed. Also, an improvised KOP grouping under the command of General Wilhelm Orlik-Rückemann conducted retreating battles against the invading Soviet army, including two battles at Shatsk and Wytyche. In addition, the heroic defence of Grodno took place on 20-22 September 1939, where, in addition to soldiers, the civilian population took part in the fighting. Here, the Soviets tied 13-year-old Tadeusz Jasiński to a tank as a human shield. The boy had earlier been brutally beaten for a failed attempt to set fire to the vehicle. Taken back by the Poles moments later, he died in his mother’s arms. After capturing the city, the Soviets murdered their defenders, not sparing civilians, including Grodno schoolchildren. Similar crimes took place in several other towns in the areas occupied by the Red Army. Despite the fighting still going on, the Third Reich and the Soviet Union concluded a treaty in Moscow on 28 September 1939, regulating the partition of Polish territory and the course of the common border along the line of the San-Bug-Narew-Pisa rivers. Poland soon disappeared from the map of Europe.