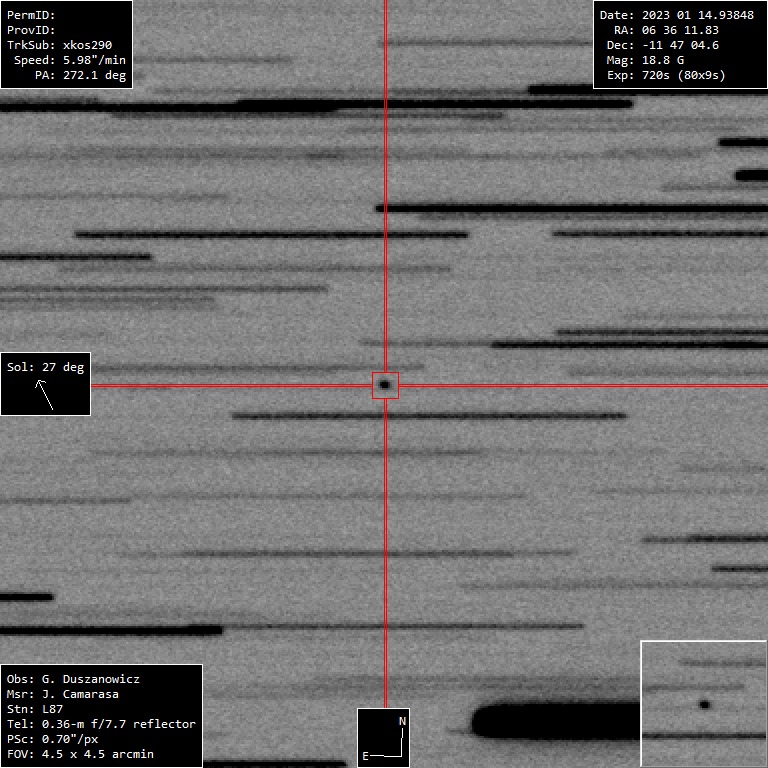 Pole Grzegorz Duszanowicz and Spaniard Jordi Camarasa from the private Moonbase South Observatory HAKOS – L87 in Namibia discovered a potentially dangerous asteroid on 13 January 2023, which is about 230 metres in diameter and approaches Earth at a distance of about 2.5 million kilometres.

The object, originally designated xks290 by the Polish-Spanish astronomical duo, entered the official Minor Planet Center (MPC) database on 15 January and received the designation 2023 AB1. The asteroid has a period of circulation of about 5.5 years and at its closest position will pass the Earth at a distance of about 2.5 million kilometres. Due to its proximity to our planet and a diameter estimated by the MPC at 170 to 200 metres, the object has been placed on the list of Potentially Hazardous Asteroids (PHAs).

Grzegorz Duszanowicz, is an astronomy enthusiast born in Krakow in 1970. He lives in Sweden and has continued his astronomical interests for more than 30 years, observing mainly comets, but also other objects in the night sky.

In 2002, he built his dreamt small astronomical observatory next to his house near Stockholm, where he installed a telescope constructed by a friend. This was a Newtonian 32 cm f/3.1 telescope, with which Duszanowicz began a systematic survey of galaxies to discover supernovae in 2004.

In 2015, he joined a remote observatory in Italy, where he continued his search for supernovae for several years. At the same time, the home observatory was moved to the Uppsala area and equipped with a remote-control system.

As of 2019, he installed his optical equipment at the Hakos farm in Namibia, where he has been searching for supernovae and now also comets and NEO (Near-Earth objects).