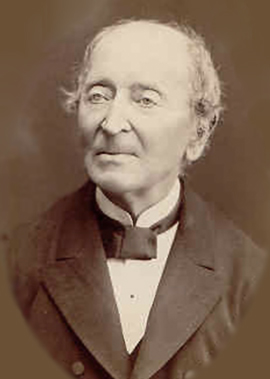 He made his mark in Polish history mainly through his patriotic activities in the Philomath Society and his friendship with the national bard Adam Mickiewicz. Meanwhile, a former participant in the November Uprising – Ignacy Domeyko, the prototype of Żegota from Mickiewicz’s Dziady (Forefathers’ Eve), is known in South America primarily for laying the foundations of modern Chile.

He was born in 1802 in Niedźwiadka Wielka (now Belarus) into a Polish landed gentry family, from whom he derived a love of his homeland and an interest in the sciences. While studying at the Faculty of Physics and Mathematics at Vilnius University, he became involved in secret independence activities. When the organisation was discovered by the Russian authorities, he was taken into custody, and thanks to his family’s efforts he did not end up in exile. He took part in the November Uprising. After its fall (1831), he emigrated to France, where he met Mickiewicz. In Paris, he continued his education, becoming an engineer. In 1838, he left for South America. Already during this voyage, he carried out naturalistic observations at sea, and geological observations during his stopovers in ports.

He settled in Chile and was involved in the geological study of the Andes for many years, making important scientific findings and discovering sources of silver in Arqueros, gold in Cauquenes, copper in Cordillera de la Campania and coal near Valdivia. In 1867, he became rector of the University of Santiago de Chile. At the same time, he came across traces of ancient Indian cultures. He wrote a book about the land of the Araucanians, reprinted many times and translated into numerous languages. In it, he presented himself as a ‘spokesman for independent Indians’.

Domeyko made an enormous contribution not only as an explorer of Chile’s treasures, but also as a lecturer at the universities of Coquimbo and Santiago and as the founder of modern Chilean education. Thanks to him, the country adopted a modern system of weights and measures and sorted out its monetary system. The Pole also initiated Chile’s industrial and mining development, the development of hydrology and water supply. For his merits, the parliament granted him honorary citizenship. He did not forget his homeland and maintained correspondence with his compatriots. He died on 23 January 1889 in Santiago, Chile. A huge mountain range in the northern part of Chile is called after him (the Domeyko Mountains).